Bus to Hardrock Cafe for Meal

Meal in London around Kings Cross

Fish & Chip meal, then walk the Pier and return by train

Barking to Pitsea via Tilbury Docks

Paddington to Oxford via Didcot

Oxford to Paddington via Didcot

Link to Dalston Kingsland not complete at this time

Shadwell to Stratford (DLR) via Poplar

Liverpool Street to Worthing via Underground and Victoria 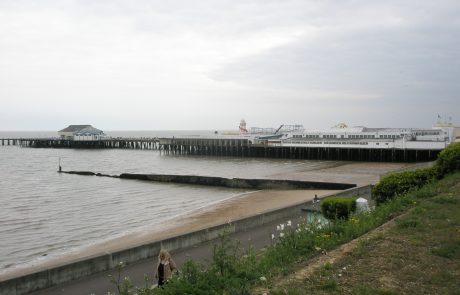 Ramsgate to Ashford via (Dover & Folkestone)

Ashford to Worthing via Brighton

This trip was made in order to catch the early Great Western Brighton to Great Malvern train.  No one in the group had visited this Cotswold town.

The train was on time and a sedate trip took place via Southampton, Salisbury, Bath, Bristol, Gloucester, Cheltenham Spa and Worcester.  Great Malvern had been visited by Michael Portillo so for once we followed him rather than he followed us when he started his rail trips around the UK.  We were first.

On wandering around the town we noticed that tours of the Morgan car plant were available if a booking was made.  The hotel owner knew their secretary and kindly booked a tour for the following morning still allowing time to return home.

The tour was extremely interesting to see how much of the cars were still handmade especially with shaping the wooden frame work.  The three wheeler model had made a comeback and now had a separate area for it production.

Starting cost for a basic model was £30,000 but most were custom made to owners requirements.  Paul O’Grady had a car being built for him and the interior work in the colour purple.

One of the others being shown round asked doesn’t the wood rot when it is outside, but the guide said if you bought a Morgan you didn’t leave it out in all weathers!!  We decided that buying one was out of our pockets!!

From there we caught the train back via Oxford, Reading and London.